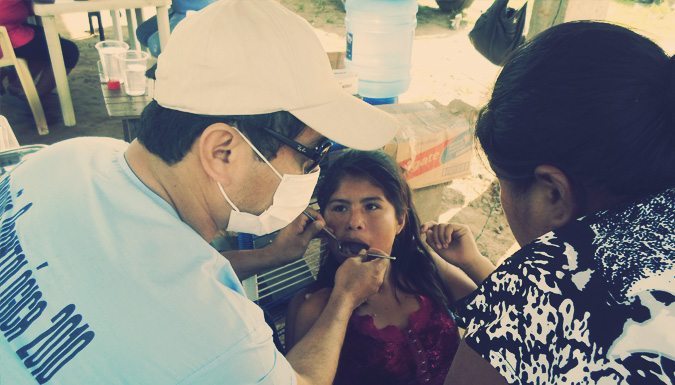 Greetings from Belgium, where I am staying a little longer than expected. I am operating and living for the last 2 months in a small Doctors on Mission promotional van that allows me to move from one town/ village to another to witness in Belgium & The Netherlands. While on this side of the ocean, an outreach to Pakistan is in the making, but I am still waiting for more confirmation. Anyway, the last months haven’t been boring at all!

When I came from Bolivia, I went first to Indianapolis, where WME (Worldwide Missionary Evangelism) invited me to their annual Mission Conference to speak about “Medical Missions in the 21st Century”. It was WME who sent me out at the end of 2013 to the smaller islands of the Philippines during the Super Typhoon. I was able to do a lot of medical work there alongside an American missionary who was working on some of the smaller islands where there was no medical care at all.

Belgium — and certainly Flanders, the region where I was born — is a huge mission field in itself. We have some American & Dutch missionaries in major cities like Brussels, Bruges and Antwerp but there is as good as no witness at all in the hundreds of small Flemish villages. So, there is a lot of work to do… I went to every place where I received an invitation and needed to prolong my stay by doing so. As always, it gives an opportunity to let people know why I am doing this missionary work.
Whether I like it or not, I am the only contact person between my medical pastoral teams in the countries I am serving and the West. The idea was to witness about the work and to make people warm to give for this missionary work.

I could witness in small Evangelical groups and also in Catholic churches. Sometimes, random “Info events” were organized in Flanders, Belgium like in the village where I was born. I was mostly warmly welcomed and people were amazed of what God had been doing during the last years.

One of the highlights was the Missionary Conference of Z&G in The Netherlands. Z&G means “Zending & Gemeente” or “Mission & Church”. The meaning of these two words together in Dutch is that a church cannot be a church without a real durable mission purpose.

Z&G paid the International travel expenses as I am affiliated with them. We come together every 5 years. It was great to spend time with several Dutch Missionaries. As usual, I am the only Flemish missionary in their midst. This Mission Conference takes place only every five years. There was much joy, encouragement, and there were intense contacts. Prayer flowed automatically from what we shared. There were also workshops and enough space to share with each other. The missionary I helped the most in the orphanage “Heart for Haiti” during the earthquake in 2010 could — sadly enough — not come because he had suffered a heart attack in Port-au-Prince and was recuperating in a hospital in the Dominican Republic. He sent a message that he was doing a lot better.

In addition, I am also facing a major additional work. An entire dossier of Doctors on Mission Belgium needs to be created with all activities of the last years, financial reports, certificates, etc. for the Ministry of Foreign Affairs. This needs to be done to allow Doctors on Mission Belgium to further receive tax-deductible donations. If everything goes well, Doctors on Mission can receive these tax deductible gifts for the coming 6 years. The deadline is the 31st of December 2014. Please, pray that everything may go well. We got a major blow as there was a theft in the house of our Treasurer. Among many things also the computer of this man was stolen. He had not done a backup during the last months.

Sadly enough, I am as good as alone to do all this extra paper work as Christianity here is at the lowest point ever. Some say that in the region I work there is one born again person for every 10.000 people! I am working against the clock to get through all this paperwork that I do not feel as being my primary call…

A third point — and certainly not the least important — is to continue online the monitoring of all activities in Bolivia, Haiti and Pakistan.

But I do have encouraging news… Due to all the witness work here, we were able to start with the construction of more facilities in Morency, Haiti for the orphans. We don’t have big funds but we do what we can with what we receive … We are first building some toilets (see pictures); then the kitchen and a shelter for the first 50 children in Morency will follow. We’re going forward step-by-step …

We also continue to support the local indigenous churches with two medical clinics we set up in Morency and in the mountainous region Artibonite (Manceaux). We are looking to get more medication and medical equipment there.

The outreaches in Bolivia continue to be a big blessing for many people. Again, the Bolivian Doctors on Mission team did an outreach in the Bolivian Amazon region in the area around Robore (see photos). Dr. Ino now has his house on the Medical Mission base in South-Bolivia where we have had a Medical Center since 2013. This ensures the continuity of the medical service we are giving. He is our local Director and continues to work with other doctors, dentists and pastors from the inland.

It seems that there is never a break in this mission work … There is always somewhere an acute distress, a certain problem and sometimes very great needs show up such as the floods in N. Pakistan where we are located. This, while just a few months ago, there was an extreme drought in Mid Pakistan (Sindh Province). Our Pakistani team visited this place too. As we witnessed many times, the minority groups — including large groups of Christians — were not helped by the local and governmental authorities for obvious religious reasons. No help results always in a lot of suffering and deaths, especially among the weakest ones. In the Sindh Province, hundreds of children and babies of Christian families became victims of dehydration. Also there, we could send out a team in the name of Doctors on Mission (see the picture of the Water supply).

With all these activities together, time is running faster than I wish… In my next letter, I hope to give some more news about what God is doing further within Doctors on Mission. As for now, Pakistan remains uncertain and missions cannot be carried out lightly. After all, it takes a lot of faith to really step in as extreme Muslim groups are active in this region. Only His guidance, wisdom and gathering all objective information possible can lead to the right decision.

Thank you for all YOUR support! It makes THE difference between life and death!

Rik & all the DM Team Members.