PAKISTANI TEAM PUTS HANDS TOGETHER AND PUT EMERGENCY LINE TO ASSIST UNREACHED NEPALIS AFFECTED BY THE EARTHQUAKE IN THE MOUNTAINOUS REGIONS NEAR POKHARA.

Parvati Shrestha, 32 years old, is the wife of Bijay. She lives in a remote mountain village difficult to reach from Kathmandu, Nepal. She and her husband Bijay rented a small one-room house in the middle of the mountains but couldn’t afford to pay their rent. Her husband finally decided to go to work in Malaysia hoping for a better future. Parvati his wife stayed behind in Sunkhani with her son Isaac.

Parvati left the church with her son Isaac at her hand and went back to her village. It was nine o’clock in the morning … She planned to continue sewing with the sewing machine she had received through a donation. Suddenly the ground shook fiercely beneath her. Large boulders came down thundered toward the rented small home that was built on a steep slope. Eventually, she and her son felt in the ravine. Something broke her fall. There, she lay down, motionless. At the same time she saw a neighbor who fell into the abyss before her eyes …. It was a tragic view. A few hundred yards deeper, she heard her groaning from pain. Then, she died …

Parvita wanted to flee but could not… Large pieces of rock had crushed her legs. The pain was intense. Her legs were bleeding profusely. Her son Isaac wept constantly. His feet were crushed too under all kind of debris. His body was covered in blood. They saw around them died bodies from friends and family who had not made it. Every hour seemed like a day. There was no water, no food and no medicine against the pain. Not even some simple pain medication like “Tylenol”…. She wanted to give up. There was no hope. There was no rescue in sight…

Everything looked black before her eyes that “Black Sunday”. The earth continued to tremble and shake. Two days later, a helicopter picked her up. The doctors told her there was nothing else to do than to amputate both her legs. The next day she saw her son Isaac. His left foot and three fingers were amputated too. 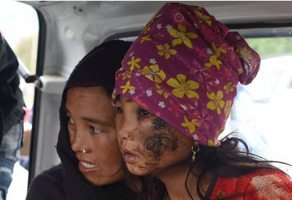 Such a stories reached our Pakistani team and moved them to reach out to their neighbors in need. A logistics helpline was set up. The need was very great…

Through small church communities, our team of N. Pakistan could further assist where International Aid couldn’t come…I tried to communicate through Facebook. But eventually, we too needed to stop the program as needs were far too big to meet with the few extra donations that came in.

Also Pakistan itself is suffering great …  We could do some small things like purchasing sewing machines for young widows. And these young ladies were very happy to have such a machine that costs locally no more then a $40. This way, they could indeed provide for themselves and their children. Many of their husbands were killed in a gruesome way. Not only Al Qaeda and Taliban revenge against the Pakistani minority  groups because of US drone attacks on their leaders. Also ISIS is now present there and recruiting many young people.

And yet there is hope! Still, we can bring hope to this damaged world, one step at a time if everybody let speak his heart and answer the call… We are truly thankful for your great help! Sometimes we can only do some small things, not because we don’t have the personal on the ground but because of lack of donations. But, it’s truly encouraging to see the joy of the people with every action! Take the wheelchair, we could purchase for the disabled orphan in the orphanage of Robin Patras. This gift meant everything for this young boy!

But also Robin & Zara – who I worked with in 2011 and 2012 – got their problems. They run an orphanage with almost no funds at hand and lost their own baby for the 2nd time in 2 years. Benjamin who was just 3 months born, died too because we couldn’t get at time the needed Antibiotics.

We could at least comfort this young couple thanks to some donations. This way, all emergency costs and funeral expenses could be paid. First, they wanted to sell their own wedding rings and the few belongings they had! But, we could stop them of doing so. If you belong to a minority group, your life is of little value…

I heard fist the news of the Earthquake in Nepal when we came from the Haitian mountains (Artibonite) with our Medical Team on rented motorcycles. The roads were inaccessible for a jeep… And such a 10-hour drive through dust or mud is not a funny drive!  It was our second out reach in Haiti because I reported first one in the previous Newsletter.

The medical work without electricity and running water is difficult. Nevertheless, we remain hopeful here. Our team is doing what it can with the gifts that we receive. We still hope to have more food, chairs, tables and even solar panel. 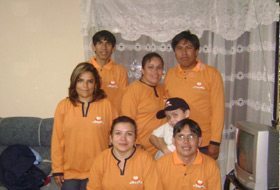 Hundreds of people could be visited and helped in the remote villages of Sausalito, Cruce Piraimiri and Piraiciti. These villages are often unknown to the own Bolivians.  We bring there the necessary assistance, support and hope to be able to count on your ongoing partnership. Thank you to be part of this mission!