Sometimes I need to go back in time to see where we left our connection with the latest situation regarding all the medical missionary work that Doctors on Mission does in the deep interior of Bolivia, Haiti and Pakistan. It always shows me how quickly time goes and how limited a report is to give an overview over the medical mission work we are conducting.

Haiti: What I see is that I was “halfway” through my Haitian mission trip when I sent you a last update. I then became very sick (involving Mastoiditis) from the Haitian mountains. A nurse who works with Doctors on Mission Haiti had a tumor needing immediate removal. I just had enough time to help my friend Pasteur Saint-Louis to stay out of prison because he could not pay off his church. This is because of the grinding poverty in the Artibonite region of Haiti.

I also promised to explain our further strategy in Haiti. But I was about to leave to the far South West point where the hurricane had struck so violently and famine and disease was threatening everybody in the region.

I adopted there 71 children. These children are mostly orphans or children coming from very poor families. Usually they walk around naked, have no food, medication or education. Many of them were just left behind if we had not intervened immediately. Despite the very difficult times that we endure because of the economic recession in the West we had no choice but to provide clothes, medical care, simple housing and school. Clothes and food, they have already. School is given outside or in a barrack. For housing, we still don’t have enough, so many sleep in the same (school) barrack.

The medical work there was intense but it is true that, when these people are healthy and have the basic necessities, they are among the happiest people on earth. That’s my humble opinion. They really do not need much … With a few dollars or Euros per month – something that almost means nothing to us Western people – they are happy and healthy children. Why? Because they then have the food, medication clothing, and can learn to read and write. 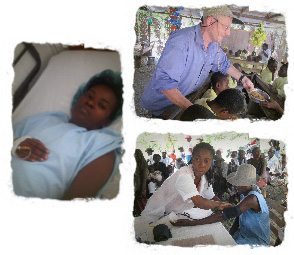 We will probably need to do the same with the 220 children my friend Pr. Saint-Louis helped despite his own debts. He simply wanted to keep them alive and give them a future. But to me, it’s clear that keeping alive hundreds of these children is no longer feasible for this brave man.

Now in a nutshell, our strategy for Haiti as I had promised in my last letter … It is very easy to explain in words, but not so easy to perform and its development will much depend on your contributions …

In the first phase, we want to give these children, who are 1 to 12 years old, food, clothing, education, medical care, education and also some shelter. We want to do this locally because of the cheap local living standards on the spot. Once they are 13 years we want to bring them closer to the larger cities. This way, they will be able to study further or learn a profession.

We want to do the same in the hurricane region in the Southwest of Haiti. Children aged 1 to 12 years will stay in the Morency area. We would do the same with the children of the neighboring region, Flamand. We believe that it must be possible to also give them at least one meal a day, some clothes, medication, some shelter and schooling. Once they turn 13 years, they could then be transferred to Les Cayes, a larger town in the southwest of the island where it’s possible to learn them a profession or let them study further.

That’s the plan! Note that this plan does not come only from me but from the people themselves as the only option to give them structural help. All the rest will depend on your partnership. Without contributions, we are powerless there.

The implementation will be long. But hey, we’ve already started ! We are sitting already with 71 children and at this very moment we are re-building the medical post in the Artibonite and providing medication.

Furthermore, the nurse with the tumor endured well her surgery. See also the pictures on Facebook under “Doctors on Mission”. Yesterday, I found out that another nurse, nurse Zephir, need an urgent surgery. She served Doctors on Mission Haiti for more than three years in a selfless way.

Bolivia: It is interesting to determine how we continue with the work in Bolivia too. We are currently working on the construction of Pastor Romulo’s church that was destroyed during an Andes earthquake. Pastor Romulo has been always my “Inca” guide for more than 23 years. We also continue with the construction of the house for Dr. Ino’s family. And sadly enough, we experienced some serious water damage in our new Southern Clinic in Tarija, Bolivia. The last mile however is always the ‘longest one’.

However the Medical Center in South Bolivia works fine since May 2013. It is now winter in the Southern hemisphere and in the Andes mountains, this means this is the dry season. And yes, even the medical center in Yamparaez — where we have transformed our offices into a medical center — runs fine. This is because of some designated funds. Most non-designated funds are continually used to provide the greatly needed medical care among very poor families.

Pastor Romulo went also with a DM jeep in the ravine due to a blowout of the front tire. Thank God, the 6 passengers including his 3 year old son Job survived and did not have major injuries with exception of one passenger who needed a rather expensive surgical intervention.

I myself came for the summer to Europe. As many have rightly pointed out, these are not always “holidays” because of the many contacts we need to make in order to continue the work. Also, the online ‘paperwork’ never stops.

Recently I fell seriously ill. Thank God, this happened in Belgium where I have good insurance. After four weeks of hospitalization at the University Hospital in Ghent I am now doing better. Once, the worst was over, I did not need books to read like the other patients but continued from my hospital bed the online work of the teams in the various countries.

Pakistan
As you may know and / or realize, Pakistan is an almost impossible task. I do have the necessary contacts but entering is so dangerous and even forbidden by most – if not all – Western embassies because of the killings of mainly foreign nurses and doctors.

They don’t want us to help the minority groups (about 6 million people!) who are mainly Christians. Even now, there are reported bombings of the Taliban and Al Qaeda network in and around the airport where I normally land.

It makes little difference in Pakistan to which religion you actually belong. As long as you’re not a Muslim, you’re the enemy. Even humanitarian organizations including the vaccination teams of the World Health Organization are a target. The attacks are usually fatal.

The minority groups that we work with get no help from the Muslim government, cannot study and need to work as slaves. They are often mistreated and abused while they live in the worst regions as in the flood areas at the foot of the Western foothills of the Himalayas.

Yet we still help case by case as Aksha, the teenage girl who was heavily burned. Ramish requiring emergency surgery or others (see Facebook). To be able to continue this, we desperately need your help!

Thousands of people are dying at this very moment because of the floods coming out of the Tibet, hunger and additional diseases. At this moment we are not able to bring mayor relief there as in recent years because – although we have the channels to transfer money to Pakistan – we are having lack of additional donations to do so. We count on your generous contributions to be able to continue this mission too. (cfr. also Facebook under “Doctors On Mission” or “Mission Doctors”).

Thank you for all your help and may God bless you for it!

Rik and all DM teams.